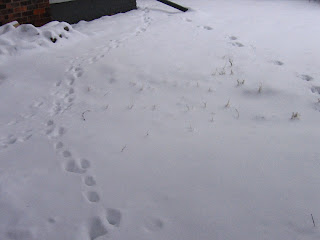 It's been very cold here in Michigan the past few days.  We even had a bit of snow, although not as much as in the old image above.  However, our three outside cats have been on my mind a lot because of the lower temperatures.  Yes, we have four-count' em-four insulated shelters on the deck, and we've even hooked up an outdoor-rated electric warming pad in the biggest one...although when I last checked, no cat had visited that one.  Each shelter has straw, and the three made from styrofoam coolers are lining completely with silvery duct wrap, which reflects their body heat.  But that doesn't lighten my concern about them.  They are just little cats, outside in the blustery cold.  If I go out there, my fingers start going numb and I shiver.  So, I project my own feelings of vulnerability onto them...and I worry.  Yet each morning, noon and night, they come running up to me, meowing and dancing for food and petting, and they eat and appear to be okay.

Sometimes, I feel as if I'm a poor hostess, allowing my 'guests' to sleep out in the barn, so to speak.  In my thoughts, I wish I could simply throw my door open and let them in.  When I first encountered each one of these cats, they would not come near me, and we did not know where they lived, after they consumed the food and water I set out.  They only started using our shelters (and I kept building more) last year.  AND that's when they began to let me pet them.  If they were still so wild and feral-like, I probably wouldn't worry so.  But they look and act just like house cats now...like Angel and Chuck.  And I think that somewhere in their lives, they once had humans of their own, otherwise I wouldn't been able to touch them.

But, I don't know if their bodies harbor anything dangerous to Angel and Chuck.  To get them to a veterinarian would mean trapping, because although I can pet and snuggle a bit, there isn't a chance I could pick any of them up to put them in a carrier.  They really ARE NOT house cats.  So, I bite my lip and turn away from them every night, and try to send healthful, protective thoughts to surround those shelters that house my very dear little friends as the cold winds blow.
Posted by Eastside Cats at 8:29 PM