Book Report: What The Cat Saw

Nela has moved into her vacationing sister Chloe's apartment, to both cat sit for Jugs, whose human just died, and to help out at the charitable foundation where Chloe works.  Nela quickly discovers that she can 'hear' Jugs, and he tells her that there is danger afoot.  The investigative reporter side of Nela is put to the test, as she quickly becomes entangled in vandalism, arson, robbery, and murder!

An enjoyable book!  I've not read any other of Carolyn Hart's books, but a quick online search shows that she is an accomplished writer.  I grabbed this one, because the local library had a display for "June is Adopt A Cat Month", and most of the other books I'd already read.  I would have enjoyed more of the 'Jugs and Nela' connection, however it may blossom more if this is the first of a series. 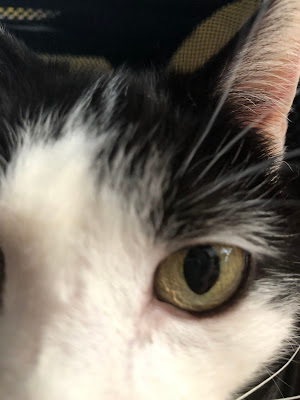 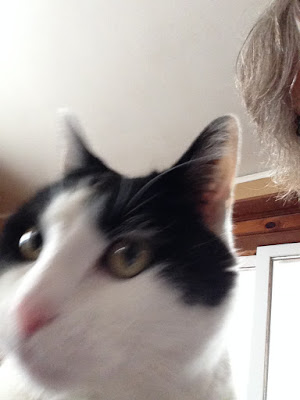 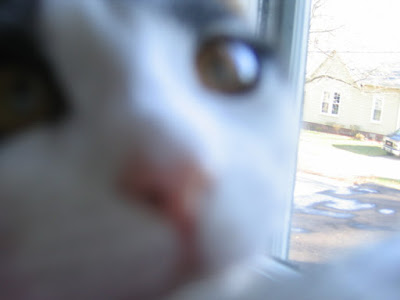 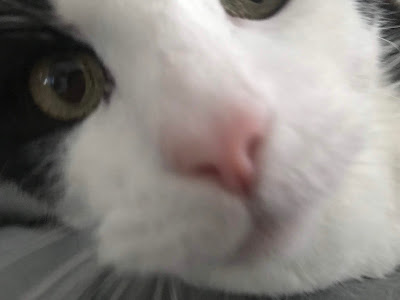 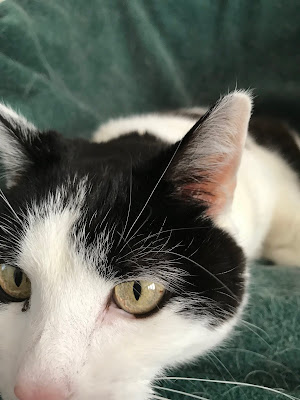 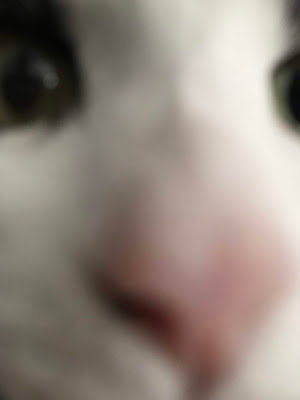 Angel has a habit of sniffing my camera, which results in some blurry pink nose snaps!  Here is a collection for your entertainment.

You all know about Sly, my half-way-'round boyfriend, on my neighborhood walks.  His brofur, Sneakers, will watch but not approach, in the past.  Lucky for me, he's recently become a love-bug!  I am thankful for that, even if Sly is withholding judgement on Sneakers horning in on his action.

Sly and Sneakers's humans have told me over and over again, that Sly will let anyone pet him, while Sneakers is very shy.  Well, guess I've proven them wrong, and I don't appreciate them telling everyone that Sly is easy!  Sly and I have a 'thing'; it's not because I have hands...really...

Folks, I've had this cartoon kicking around for years and years.  While I am not a fan of gladiators, or throwing whomever or whatever to the lions, as history tells us the ancient Romans did, this cartoon is a silly bit of whimsy.  I like the way the wee cats, with their little ears and whiskers, are drawn.

Email ThisBlogThis!Share to TwitterShare to FacebookShare to Pinterest
Labels: Da Boyz, Don't ask me which one is which, Double-wide, remember to mouse over the photos!, scratcher, Two-zday

The Eastside Cats dominate the world by being
CUTE!!!!

Email ThisBlogThis!Share to TwitterShare to FacebookShare to Pinterest
Labels: Angel is as cute as a button, Cat World Domination Day, I love Angel!, I love Chili Bruce!, I love Manny!, I love Paddy!, I love Sweetie!

Does this logo resemble a cat's nose?

Users of social networks had earlier suggested that the logo of the company Tesla created based on the human body.

It was noticed by Twitter users and the company’s founder Elon Musk has confirmed, writes Gromadska.

One of the users posted a screenshot of the message, which depicts the logo of Tesla and nose of the cat. The user asked the Mask, is it true that the logo of the company created by analogy with the cat’s nose? Is the founder of Tesla replied curtly: “Yes.”

According to the publication, users of social networks had earlier suggested that the logo of the Tesla is inspired by the structure of the female reproductive system.

Features of the cat’s nose like with the Tesla logo

UNIAN reported earlier that the owner of the American company SpaceX and the head of electric car manufacturer Tesla Elon Musk for the first two minutes of trading on the NASDAQ has lost $1.1 billion, after the shares of Tesla Inc. fell by 11%."

Email ThisBlogThis!Share to TwitterShare to FacebookShare to Pinterest
Labels: cat nose, Logo, Paddy O'Malley, sometimes stuff on the interwebs is just bollocks and we love it!, Tesla

Angel Has A Locale For Every Mood!

In addition, there is the chair with the rug, and the chair with the blanket.  A rocking chair, a couple of human beds, and the old beddy on top of the shelving unit.  Then, there are the wooden tables pushed up to a few windows.  Last, but not least, she hides under the claw-foot bathtub, and under a dresser!


Paddy O'Malley is my 💓 cat.
His arrival in our yard changed my life, and I am beyond thankful for that.

I am ever so thankful for all of you, my bloggy friends!  As our three cat families grow and change, and as I continue to meet and snap photos of neighbor cats, and the cats of friends and family, you all hang in there and laugh when I laugh, and cry when I cry.  And YOUR love for The PO'M seems to have no bounds, 'cause he's such a character, and as handsome as heck to boot!

Not to be confused with Boxing Day, which occurs the day after Christmas, and I still haven't quite figured out what Boxing Day is all about, since we don't celebrate it in America.

Here are some images of Eastside Cats enjoying their cardboard boxes.

We are fortunate that I have an endless supply of boxes from my office.  Copier paper boxes, used shipping boxes, and coffee packet boxes pile up daily.  Repurposing is recycling, and the cats enjoy them so.  The 'O' Cats often get fresh boxes, since the rain and snow make them mushy, plus both Sweetie and The PO'M use them as scratchers.

I even purchased a fancy box-cutter, with retracting blade, just for boxes to be made more usable by the cats.  The Hubby does NOT have access to this tool; it's MINE!

Email ThisBlogThis!Share to TwitterShare to FacebookShare to Pinterest
Labels: cats love boxes, Chili Bruce, Don't ask me which one is which, International Box Day, Manny, remember to mouse over the photos!, Sweetie

Did I fool you?

Email ThisBlogThis!Share to TwitterShare to FacebookShare to Pinterest
Labels: Catnip Toys, Da Boyz, Don't ask me which one is which, Two-zday

My niece is on a month-long internship in Paris!
My sister and her husband flew over for a visit, and while they were there, I received photos of cats from their travels!

Seriously, I am so lucky to have family members who think about me while they are off having a great time!

And some images of just the usual stuff one sees in Paris...

Fingers are crossed that my niece finds employment with this company, and goes back to work in Paris, then I'll be there, sleeping on her sofa, and visiting museums, eating at cafes, and drinking coffee and wine!
O la la!  Quelle vie!

A few 2004 photos of The Hubby with Angel and Chuck.

Happy Father's Day to all the cat dads, granddads, uncles, and brothers!