A Farewell: No and Yes

My friend, who I've known since kindergarten class, died unexpectedly this Monday.  It was almost a year since I'd last seen him, and for a good many years prior we had been out of touch.  And yet, looking at all the family photos on display at the funeral home (quite a few with me in them!), so many memories pushed into my head.  He was unable to take 'no' for an answer.  One way or another, he 'helped' you to see things his way, and to say 'yes'.  And one was very rarely sorry for saying yes: we would visit The Detroit Institute of Arts, go to discos (yeah, now I'm showing my age!), and even pretend shop for wedding rings while still in high school.  We attended concerts, planned parties, and played euchre (card game) as often as possible.  Kevin was never my date, nor a romantic partner, but he was a dear friend.  He lived life fully, and he is already sorely missed.

So, when my phone rang last night, with news of an event in Chicago in a few weeks time with my girlfriends, I did what I normally do, and said, "No". Then thoughts of Kevin's untimely death and his persistence in wringing a 'Yes' out of us all, made me change my mind.  I may not be able to do all of the crazy things in life that I would like to do, but I can do some...and a quick weekend trip to Chicago isn't really that nutty, is it?

So long, Kev...I love you and you will always be a part of me.

And to you all out there...hug your loved ones tight, be they human or furry. Every day is a gift, and sometimes we let the drudgery of living blind us to it.  Make love, not war, and do joyous things with your time. 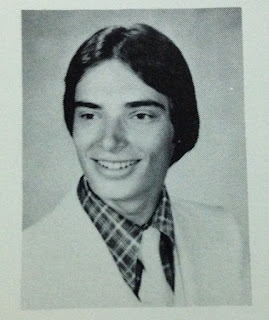 Email ThisBlogThis!Share to TwitterShare to FacebookShare to Pinterest
Labels: farewell

Please excuse the poor quality of these photos, but they had to be taken as covertly as possible! 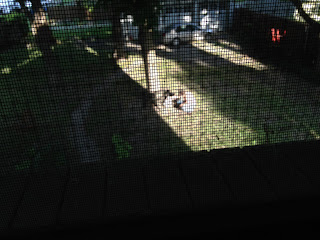 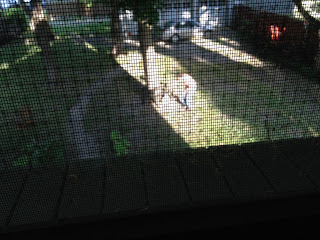 Yep, that's The Hubby in the backyard, petting Aries!  Aries is really a lover. I had to document the moment in a split second while watching out the back window screen and the netting that we've wrapped the balcony in for cat security.  Plus, The Hubby HATES having his photo taken, so shhh...don't tell him. 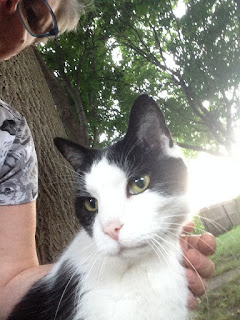 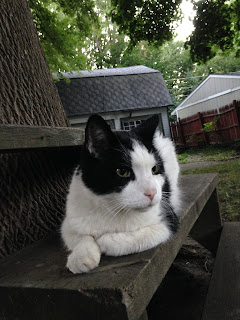 I too manage to get some petting time in with Aries every day.  He seems to enjoy the old wooden steps that The Hubby set against the maple tree.  We now call them "Aries's Bleachers" or "The Bleachers".

Email ThisBlogThis!Share to TwitterShare to FacebookShare to Pinterest
Labels: Aries, covert operations, The Bleachers, the hubby

Jackson Galaxy, the self-proclaimed Cat Daddy, has a television show that airs on Animal Planet: see info here.  I have been a faithful viewer since the program began in 2011.  The premise: people have a cat whose behavior is making their human family crazy.  One early episode ("Wildcat! originally aired May 21, 2011) has always stuck out in my mind; that of kitten Minibar, who was too feral and unsocial for her owners, Carre and Brian.
Jackson Galaxy helped the couple find ways to encourage Minibar to come out from under the furniture, with play and better access to litter boxes.  By episode end, Carre and Minibar had truly bonded together, even after a chase through a studio full of wood, shelving and tools!

Imagine my surprise, while watching a brand new show this weekend (you see how I waste my time?) on the DYI Network, entitled "Sight Unseen".  A California couple of Carre' Calloway and Wes Borland purchase an old mansion in Detroit, Michigan without actually visiting it first, and the episodes follow them as they renovate a once luxurious home.  More info can be found here.

Imagine my surprise when I recognised Minibar's mom!  Yep, the Carre from 2011 and Carre' from 2016 are the same person!  And it turns out, Wes Borland is pretty famous for his guitar music with the band Limp Bizkit, and Carre' is Queen Kwong, an indie rock band.

The Hubby was fairly impressed that I had remembered her face after all this time, and research on the internet then gave me the answers, (and all of these photos!)  Cats were mentioned in an episode of "Sight Unseen" but no cats were actually on camera, darn it.

So, how cool is this?  Well, I don't know how cool it is, but I do know that this couple is severely pro-animal, they like cats, and they like Detroit. Makes them A-OK in my book, since I've lived in Metro-Detroit for my whole life, I'm vegan, and you KNOW that I lurv my kitties!

Yep, who knew?  Aries, the neighbor's cat who now eats and sleeps on our backyard deck, is also my new lap cat!  No other kitty of our acquaintance will make use of human lap real estate, but Aries is a lover and gave me some purrs and pets.

Patty O'Malley, of course, takes exception to any other cat receiving attention from me, and he manages to get in the way of photos or petting sessions when the mood is upon him.  Little Sweetie will give Patty a swat and a yowl, but she runs off out of range, and Aries turns his back of disdain to me, as a warning from getting too close or else Patty will break up the party!  As much as I've tried to put an end to this territorial display from Patty, he continues to do it and we all just have to live with it.
Posted by Eastside Cats at 12:11 PM 10 comments:

You Wanna See My Belleh?

Have not yet decided if these will join the office collection, or the home gallery.
Posted by Eastside Cats at 3:34 PM 9 comments:

The Story Behind Migrating Woolies!


Ahem...Chuck tells me that I've gotten the story all WRONG!  He is not the reason that my woolie socks disappear from the bedroom, to be rediscovered strewn about the house.  Chuck swears that the woolie socks move on their own; he just follows them to see how far they go.  He says they must be migrating from upstairs to downstairs where it's a bit cooler during the day...yeah, that's the ticket.  They are migrating!

Okay, Chuck...whatever you say.  How do you explain the wet drool marks, then?  Oh, you are napping and cannot be disturbed?  Pardon me, Oh Big Black Cat, Sir Slinky In A Fur Suit.  I'll tiptoe around all the woolies on the floor, moving quietly away...

P.S. Chuck and Angel thank you all for the birthday wishes!  As a special treat for the day, they both got a sprinkle of nutritional yeast on their dinner. I know, I know...I spoil those two rotten!  Chuck's intestinal issues mean we cannot deviate from the prescribed meds and foods right now, and whatever we set out for one is also eaten by the other.  We must err on the side of caution right now.
Posted by Eastside Cats at 12:09 PM 10 comments:

Today is Chucky and Angel's birthday!  12 years-old, which translates to mid-to-late sixties in human years.  Chuck is loving, stubborn and funny, while his litter-mate Angel is cautious but brave, and as sweet as maple syrup!  The Hubby and I adore you two; Happy Birthday!!!
Posted by Eastside Cats at 9:24 AM 30 comments:

Some insect is attacking The Cat Hotel!  They are drilling holes, and kicking out sawdust.  I have tried to stuff diatomaceous earth in the holes, and have used paint to seal them up.  But nope, these little flying things have invaded.  Looks like my next step is to pull The Cat Hotel out from under it's cover, and figure out if these insects have breached the inside.  Heck, if we have to build a new shelter, that's okay, but we would like to just keep using this one.  May have to break out some sort of die-bug-die stuff, and somehow figure out a way to do no harm to the cats.

I really am a nature-lover; see the photo below?  That's my garden, full of milkweed plants.
Why, you ask?  Because I have read that Monarch Butterfly larvae love milkweed, and since the Monarch Butterfly population is declining, we decided to give them a feast if they choose to eat it!

I do not want to kill anything, however The Cat Hotel needs to remain in good condition.  Wonder what these little boring insects are, anyhow? Guess I'll be working on this puzzlement over the weekend.

Yes, you may know me as a crazy person...with cats...but before that, I was a Trekker.  Was, and always will be!  Patrick Stewart, who played Captain Jean-Luc Picard for years, is an absolute favorite of mine; for his Star Trek role, for his deep, sexy voice and look...he's a cat man too!

Which cat is which?

Actually, it's easy!  Cat A is Angel; her ears are pink inside, and she has white and black fur on them too.  Cat B is Aries: his ears are all black, and are dark inside.

However, in a quick glance, it's hard to distinguish which one is which. Surprisingly, Angel and Aries are about the same body size, although I'm guessing that Aries is somewhat older, plus he's a boy.  He spends most of his time in our backyard, and he hasn't missed a meal since we've set out a bowl of his very own, rather than having to eat up Patty and Sweetie's leftovers.  I think he's moved into Mama's House; the empty shelter we built in 2009 when Sweetie had her kittens.  I'll get photographic evidence soon!

Aries loves to be petted and smooched, and he's easily picked up and carried.  Cannot say the same thing for Angel: although she purrs when petted, she dislikes being handled (although she relaxes for The Hubby...), and she would rather observe from beyond arms-length.  To have her walk toward a human is such a big deal!  We love her pink nose and her pink ears and her white whiskers and her shy ways to distraction, and Aries is making himself into a loving part of our cat world too.
Posted by Eastside Cats at 10:44 AM 10 comments: 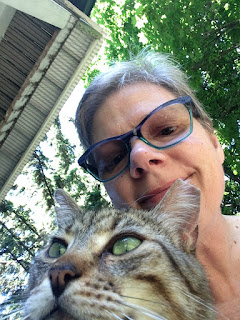 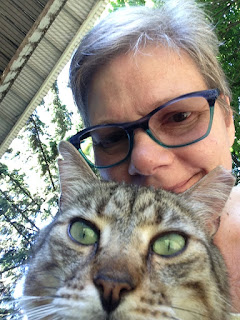 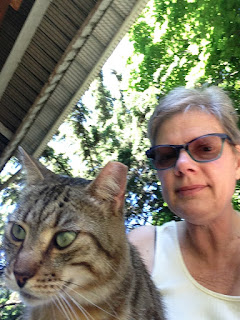 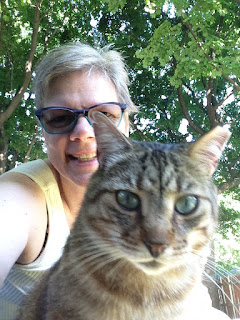 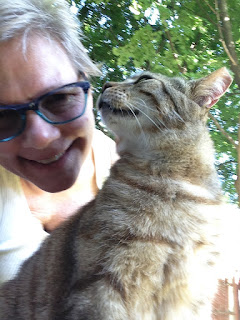 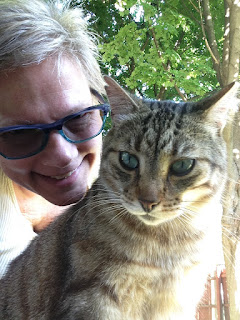 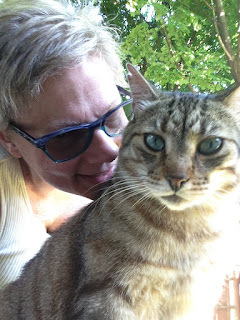 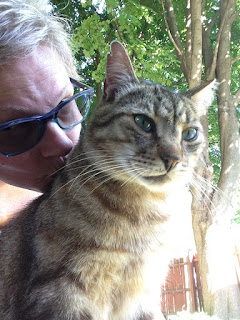 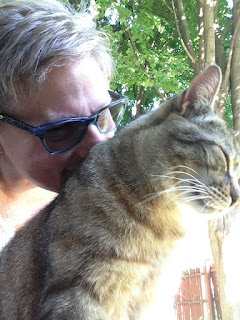 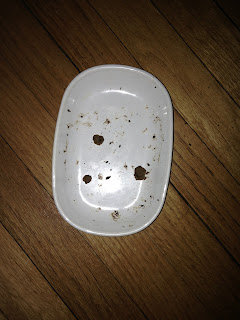 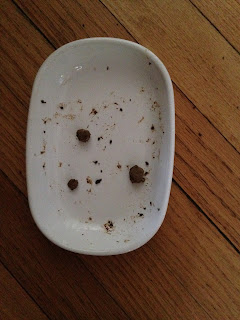 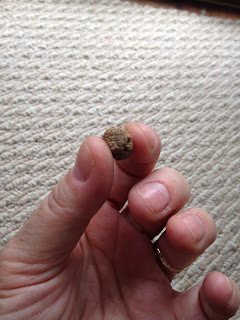 Chuck and Angel have this weird habit of making nuggets or balls out of their food.  Must have something to do with the way their tongues swipe at the mushy mess, but it's a bit puzzling just the same.  In the end, they always come back and eat up those too, leaving only bitty dry crusts stuck to the bowls.  Oh well; no harm, no foul...it's just another cat thing that make humans shrug their shoulders!

By the way, we use Corning Sidekicks as cat food bowls; the sides are low for no whisker fatigue, and they wash up like a dream (or, so The Hubby says...)  The bottoms are smooth; so many bowls made especially for cats have rough or scratchy bottoms that would mark the wood floors.  We already had several Sidekicks in the house to press into cat bowl service, and I purchase any that I find while out at the resale shops, if they are in good shape and cost $2.
Posted by Eastside Cats at 11:30 AM 11 comments: