It's Sweetnesday!
Sweetie loves being warm, and she finds a sunny spot to nap in, even if the stripes from the blinds make a pattern on her fur... 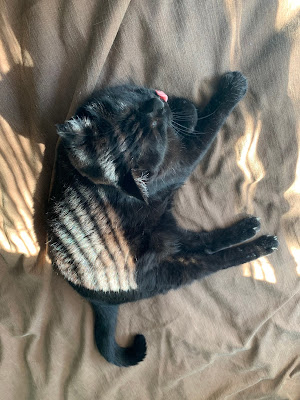 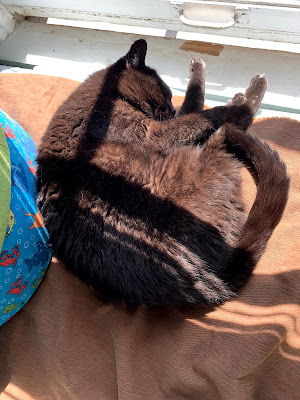 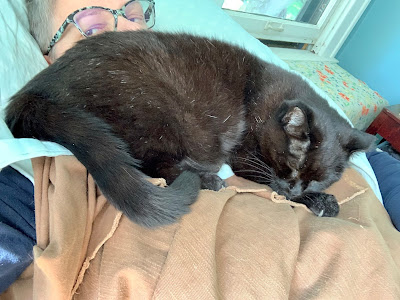 Email ThisBlogThis!Share to TwitterShare to FacebookShare to Pinterest
Labels: feral adapting well to inside, I am a human cat bed and I love it!, stripes, sunshine, Sweetie

It's Twozday!
Manny and Chili Bruce are adapting to the changing weather.
Posted by Eastside Cats at 8:34 AM 16 comments:

Email ThisBlogThis!Share to TwitterShare to FacebookShare to Pinterest
Labels: "The black one is Manny and the other black one is Chili Bruce", autumn, Don't ask me which one is which, duet, they're so fine they blow my mind, Twozday

PO'Monday!
My computer made this 9/27/15 video for me, as a memory.
It's a bit long, but watching Paddy O'Malley make a mess while slurping water is just more proof that he was a clown.
I hadn't noticed Sweetie's blink in her section of the video, when I'd made it all those years ago, but it made my heart go pitty-pat to see it. ❤️
Posted by Eastside Cats at 9:49 AM 16 comments:

Caturday, with Prisma.
Some artified handsomeness for your enjoyment!
Let's Hop!
Posted by Eastside Cats at 8:00 AM 14 comments:

Grabbed From The Interwebs 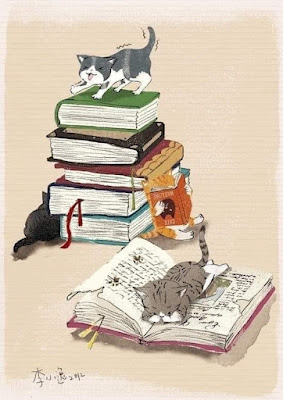 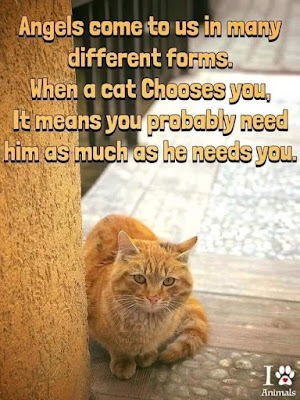 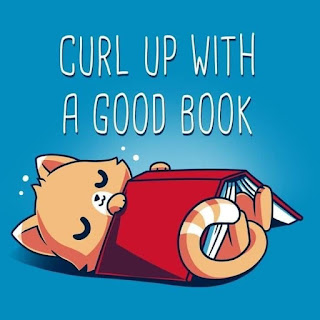 🐈Am a sucker for cats and books images!📚
Posted by Eastside Cats at 7:30 AM 14 comments:

Email ThisBlogThis!Share to TwitterShare to FacebookShare to Pinterest
Labels: cats and books, cats are great, Just for kicks and giggles, weird stuff found on the interwebs

Too many pets die in shelters.
We are their voice.
We can influence others to adopt, and not shop.
There are plenty of moggies and purebred animals available!
Remember Me Thursday!
#seethelight
#RememberMeThursday 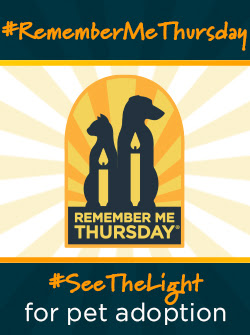 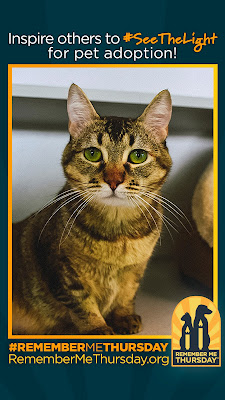 Let's Hop!
We are thankful for the tireless work done by animal shelters, rescue groups, fosters, TNRers, and pet lovers everywhere!
Posted by Eastside Cats at 7:30 AM 16 comments:

It's our 8th Blogoversary!

A few photos to highlight what we've posted about over the last eight years.

for joining us, for commenting, and for being a part of our family.

Each year the International Day of Peace is observed around the world on 21 September.
The UN General Assembly has declared this as a day devoted to strengthening the ideals of peace, through observing 24 hours of non-violence and cease-fire.
In 2021, as we heal from the COVID-19 pandemic, we are inspired to think creatively and collectively about how to help everyone recover better, how to build resilience, and how to transform our world into one that is more equal, more just, equitable, inclusive, sustainable, and healthier.
The pandemic is known for hitting the underprivileged and marginalized groups the hardest.
By April 2021, over 687 million COVID-19 vaccine doses have been administered globally, but over 100 countries have not received a single dose.
People caught in conflict are especially vulnerable in terms of lack of access to healthcare.
In line with the Secretary-General’s appeal for a global ceasefire last March, in February 2021 the Security Council unanimously passed a resolution calling for Member States to support a “sustained humanitarian pause” to local conflicts.
The global ceasefire must continue to be honoured, to ensure people caught in conflict have access to lifesaving vaccinations and treatments.
The pandemic has been accompanied by a surge in stigma, discrimination, and hatred, which only cost more lives instead of saving them: the virus attacks all without caring about where we are from or what we believe in.
Confronting this common enemy of humankind, we must be reminded that we are not each other’s enemy. To be able to recover from the devastation of the pandemic, we must make peace with one another.
And we must make peace with nature.
Despite the travel restrictions and economic shutdowns, climate change is not on pause.
What we need is a green and sustainable global economy that produces jobs, reduces emissions, and builds resilience to climate impacts.
The 2021 theme for the International Day of Peace is
“Recovering better for an equitable and sustainable world”.
We invite you to join the efforts of the United Nations family as we focus on recovering better for a more equitable and peaceful world.
Celebrate peace by standing up against acts of hate online and offline, and by spreading compassion, kindness, and hope in the face of the pandemic, and as we recover.
Peace.
Love.
Cats.
✌💕🐱
Posted by Eastside Cats at 7:00 AM 10 comments:

It's PO'Monday!
Photos from exactly one year ago. 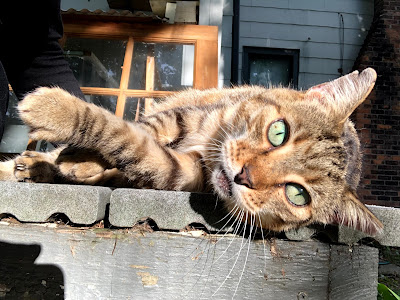 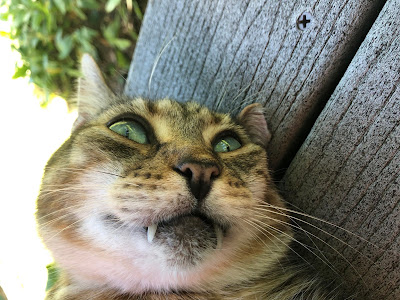 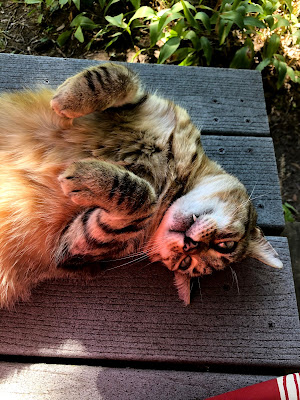 My Prisma app has so many different styles; I just play with them almost daily.
There is something about black cats too, that make them purrfect models for my artification!
Hope you enjoy the puzzles too.
Let's Hop!
Posted by Eastside Cats at 9:01 AM 15 comments:

Email ThisBlogThis!Share to TwitterShare to FacebookShare to Pinterest
Labels: "The black one is Manny and the other black one is Chili Bruce", Athena Cat Goddess, Caturday Art Blog Hop, Don't ask me which one is which, online jigsaw puzzles, Prisma, Sweetie

I recently discovered the Ruth Galloway series, written by Elly Griffiths, on a Facebook group.

This series, to me, is like eating potato chips; you can't have just one!

Anyhow, one aspect of this series is that Ruth loves her cats!

Ruth is an archaeologist, living in North Norfolk, U.K.

She teaches at the nearby university, and finds herself involved with the local police when a skeleton is discovered and they call upon her unique skills at identifying buried bones.

There are other fun things, like druids, saltmarshes, spectral hounds and boogey men, and some good old romps in the sack!

She pines for her cat, Flint, whenever she's away from home for more than a few days.

Cats are harmed in the first two books, and that in itself would put me off a series (and a writer) in a heartbeat!

However, the author has made it very clear that she deeply regrets writing about such cruel things, and I've encountered no more of this type of nastiness in any of the other books.

The author is a true cat-lover.

I'm told there is a TV series based on these books, but I haven't seen it...yet.

For years, we've shopped at a local pet store.
In December, 2017, the Premier Pet Supply store in Beverly Hills, Michigan, was where I spent my lunch break, and look whom I saw in the cat adoption center!
Yep, that's Manny and Chili Bruce, known as Spiderman and Bruce Wayne then.
Last weekend, I discovered that they've expanded to new location nearer to our home, and I visited right away.
What a lovely place, with the same warm and welcoming attitudes that drew me to their flagship store, where Da Boyz were waiting for us!
I am thankful for this local business, and now even more so that they are closer to our side of town.
Not that this means much to you all who live outside of Metro Detroit, yet we all have our favorite home-grown establishments that we are happy to give our hard-earned money too.
Let's Hop!
Disclaimer:
I featured this pet store chain, and purchase from it, for my own use.
I only post about items that I think you all may enjoy, and receive no financial gain for myself.
Posted by Eastside Cats at 7:30 AM 19 comments:

Eastside Cats will now show off their felt hats...

Disclaimer: No cats were harmed in the creation of these images, but they may have been embarrassed...

It's Twozday!
Sometimes, Da Boyz travel alone.
A new development:
If you look at the top photo hard enough,
you'll notice a tiny patch of fur next to Manny's nose that looks like a white beauty mark.
It's one way to tell Da Boyz apart, if you cannot flip 'em over to look at the white spot on their bellies (Manny has the big spot, CB's is small), but that wee white spot is very tiny and difficult to see!
Posted by Eastside Cats at 8:00 AM 17 comments:

Email ThisBlogThis!Share to TwitterShare to FacebookShare to Pinterest
Labels: Manny and Chili Bruce, so cute, Two-zday, Twozday, what a pair 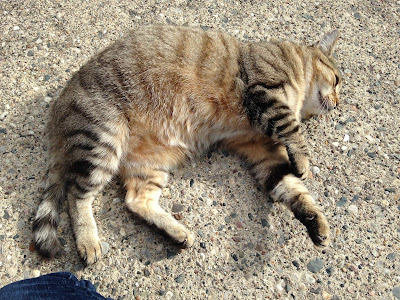 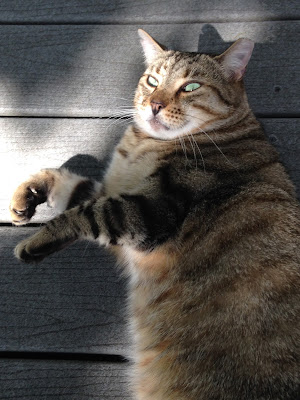 A selection of Celestial Pommy photos from September, 2019.
As handsome as his face was, that body of his was a sight to see, and he enjoyed showing it off!
😻😹😻
Posted by Eastside Cats at 8:00 AM 17 comments:

Playing with my Prisma app, all three cats seems to be hiding their faces!
😹😻😹
Let's Hop!
Posted by Eastside Cats at 7:30 AM 15 comments:

Email ThisBlogThis!Share to TwitterShare to FacebookShare to Pinterest
Labels: "The black one is Manny and the other black one is Chili Bruce", Athena Cat Goddess, Caturday Art Blog Hop, Don't ask me which one is which, Manny and Chili Bruce, Prisma app, Sweetie
Newer Posts Older Posts Home
Subscribe to: Posts (Atom)