Once again, Patty O'Malley has inserted himself between me and Sweetie.  He is my personal body guard, or makes himself into a buffer zone to keep me away from anything dangerous, be it another kitty...or snow drop flowers!

*play on words from the Jane's Addition song, "Been Caught Stealing" 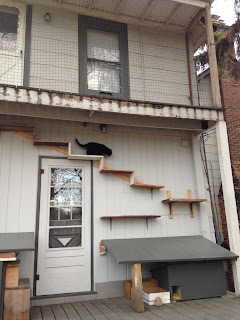 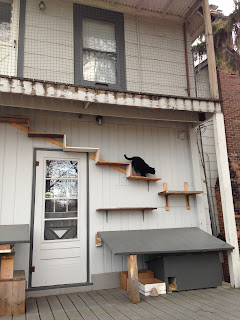 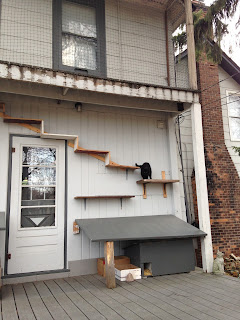 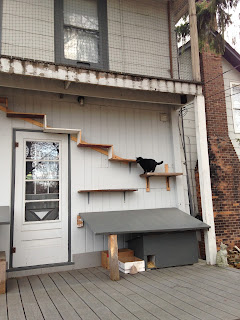 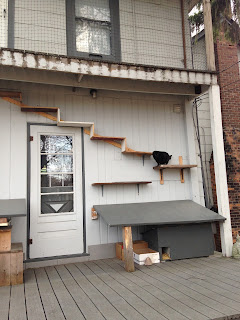 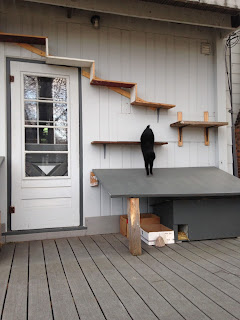 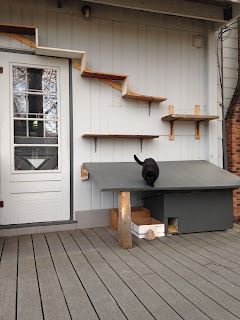 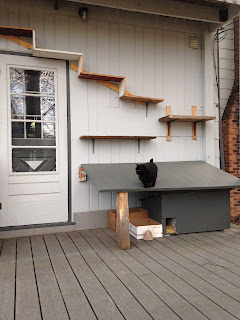 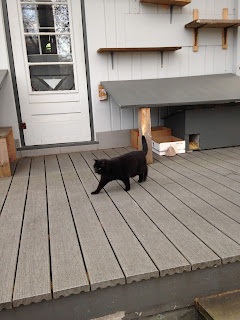 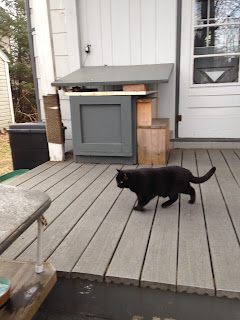 Sweetie was up on the balcony!  I couldn't get my phone out fast enough to record the look on her face when she was caught looking down!  This is fabulous, because it means both Sweetie and Patty O'Malley are comfortable going up and down.  Now, I need to find ways to tempt them in the balcony door.
Posted by Eastside Cats at 5:30 PM 11 comments:

Email ThisBlogThis!Share to TwitterShare to FacebookShare to Pinterest
Labels: caught looking, Stairway To Heaven, Sweetie goes up and down

As I sat on the bed this morning, Chucky suddenly ran into the room, and made like a badger running into it's den with the bedclothes.

I slid back under, and petting him gently, telling him he's alright; it's all alright!  I advised The Hubby to make a floor check, and yep, some bits of stuff that Chuck usually leaves in the litter box was found. Obviously, his tummy or intestines were upset, and he crawled under the blankets to soothe himself.

Fortunately, this drama was short-lived, because when I opened a can of cat crack (known by most folks as: BFF Tuna & Tilapia Twosome Recipe in Aspic Grain-Free Canned Cat Food) a short while later, Chuck ran out from under the covers and right up to his breakfast bowl.  Since then, I've had no other reports of problems; hopefully Chuck is back up to snuff again.

In the past, Chucky under the covers meant lots of laundry, if you know what I mean. When we see the veterinarian next week, we'll discuss this latest event, which is probably a nothing-burger. Will admit, it was very nice to have five full minutes alone with Chucky all snuggled with me in the bed, even ifbut that's a bit selfish.

Have a terrific weekend! 😸
Posted by Eastside Cats at 2:07 PM 18 comments:


Feeling nostalgic for the few photos that I have of Angel and Chuck as wee babes.  What we did not know about kittens and cats back in 2003 would fill a Olympic-sized swimming pool!  Thank goodness the cats were able to grow up with us, and neither The Hubby nor I can imagine life without them now.
Posted by Eastside Cats at 11:30 AM 15 comments: 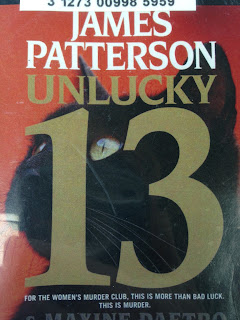 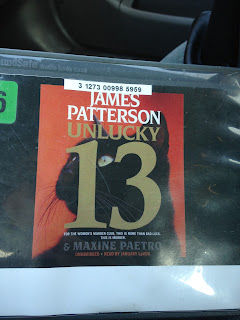 Was at the library, looking over the shelves and found this, "Unlucky 13" by James Patterson and Maxine Paetro, and first published in 2014.  This is an audiobook on CD, and I'm listening to it in The Cat Car during my daily commutes.  I grabbed it because...well, duh...look at that beautiful black cat on the cover!

I am now on the third CD of nine, and it's a fairly interesting story, about San Francisco police officer and her friends who all pitch in to help solve mystery and murder.  No cat has appeared as a character or even living WITH a character yet.  Not what I've come to enjoy from James Patterson; it's kind of girly, in the way that MEN think women act, not the way we really do.  However, the underlying dilemmas are compelling, so I'll keep listening.  Also, I've randomly grabbed the 13th in the "Women's Murder Club" series, which is now on it's 16th book.

Goes to show, you should NOT judge a book by it's black cat cover!

The Hubby wants it known far and wide that he has no input
for this blog!

He does not approve of photos of heart-shaped peeballs
from the litter box!

He does not approve of 'tocks photos, discussions about hair balls or any other cat ejecta!

The Hubby stands as a creative counselor and sometimes
cat wrangler for photo shoots, but he wants known to all
that he has NO CONTROL over content; it is all purely from The CatHead, sometimes called
Cat Momma Daddy.

The Hubby is also known as Cat Daddy Momma.

Email ThisBlogThis!Share to TwitterShare to FacebookShare to Pinterest
Labels: Angel Loves Her Bed, Chucky can be a snot, disclaimer, The Hubby is a killjoy

I will take this in the vein that the cats love me...wouldn't you do the same?


Wait a minute, didn't the same thing happen last year?
Yep...look here!
Gosh, my kitties are so demonstrative...
Posted by Eastside Cats at 11:15 AM 19 comments:


These three will be seven months old on February 19.  My dear friends P&M adopted them, and are delighting in the happy group. The Cat Crew also includes Miss Sassy, who is around 2 years old, and elderly gent Spit Spot who is past 20!  Do you know what the bad thing is about all of this?  They live over 1,000 miles away!  How can I play with and love on all of these cuties?


Thank goodness for today's technologies...text messages and phone photos make sharing our babies with each other so much easier! Even from much too far away.

We lost Chucky this morning.  Looked high and low...he was gone! Disappeared!  Vamoosed!

Then, I opened the coat closet, and out he ran!  I've recreated the scene here, while NOT at home:


As I left the house and jumping into The Cat Car, I managed to snap a couple of photos of a long black cat in high dudgeon, now hiding in the bay window.

Apparently, he snuck into the coat closet when I opened it to hang my coat up after feeding The 'O' Cats.  Usually, that coat closet door stays open a wee bit open, so Chuck probably thought he could get out again, but I had done a good job of closing it.

Email ThisBlogThis!Share to TwitterShare to FacebookShare to Pinterest
Labels: poor recreation, Sir Chucks-a-lot was locked in the closet, The Cat Car 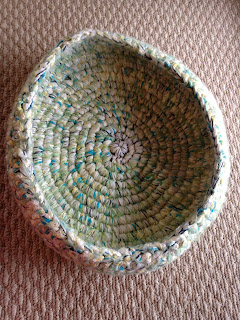 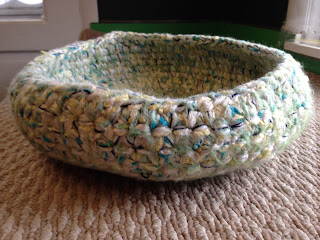 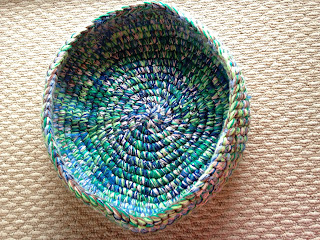 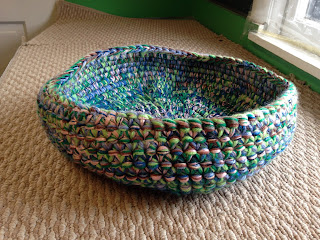 I picked up these two adorable cat beds from New Beginnings Animal Rescue (NBAR) in Royal Oak, Michigan last week.  Since Angel and Chuck seemed to enjoy their new scratcher/bed, I figured these soft, cozy hand-made ones would suit them as well.

However, as anyone who has ever been owned by a cat knows, cats do what they want to do, when they want to do it.  Both cats have given these new beds a thorough sniff test, and paws have walked on and around them.  No napping has yet taken place, at least that I know of.  Personally, these look like works of art, so having them out is a bonus.  Wish I could sleep in them!

About New Beginnings Animal Rescue (NBAR)...what a cool place!  I didn't even think to snap any photos, because I was blown away by the big, open rooms for free roaming, and the staff and volunteers were so welcoming and obviously in love with cats!  There was a couple in the lobby, thinking about adopting a cute tabby cat, while another woman stood waiting for her turn to pick out a new furry member of her family.  Ooh, I just LURV happy kitty stories!

Some wonderful volunteer crocheted these cat beds, and they only asked $10 each.  Such a deal, that is, when I get a cat to nap in one. They will someday: I just know it!
Posted by Eastside Cats at 3:52 PM 18 comments:

Angel and Chuck LOVE the scratcher/beddy that Cody from Cat Chat with Caren and Cody gifted them!

They don't fight over it; whomever gets there first has it, until the scratcher is vacant.  Then, the other cat gains occupation...