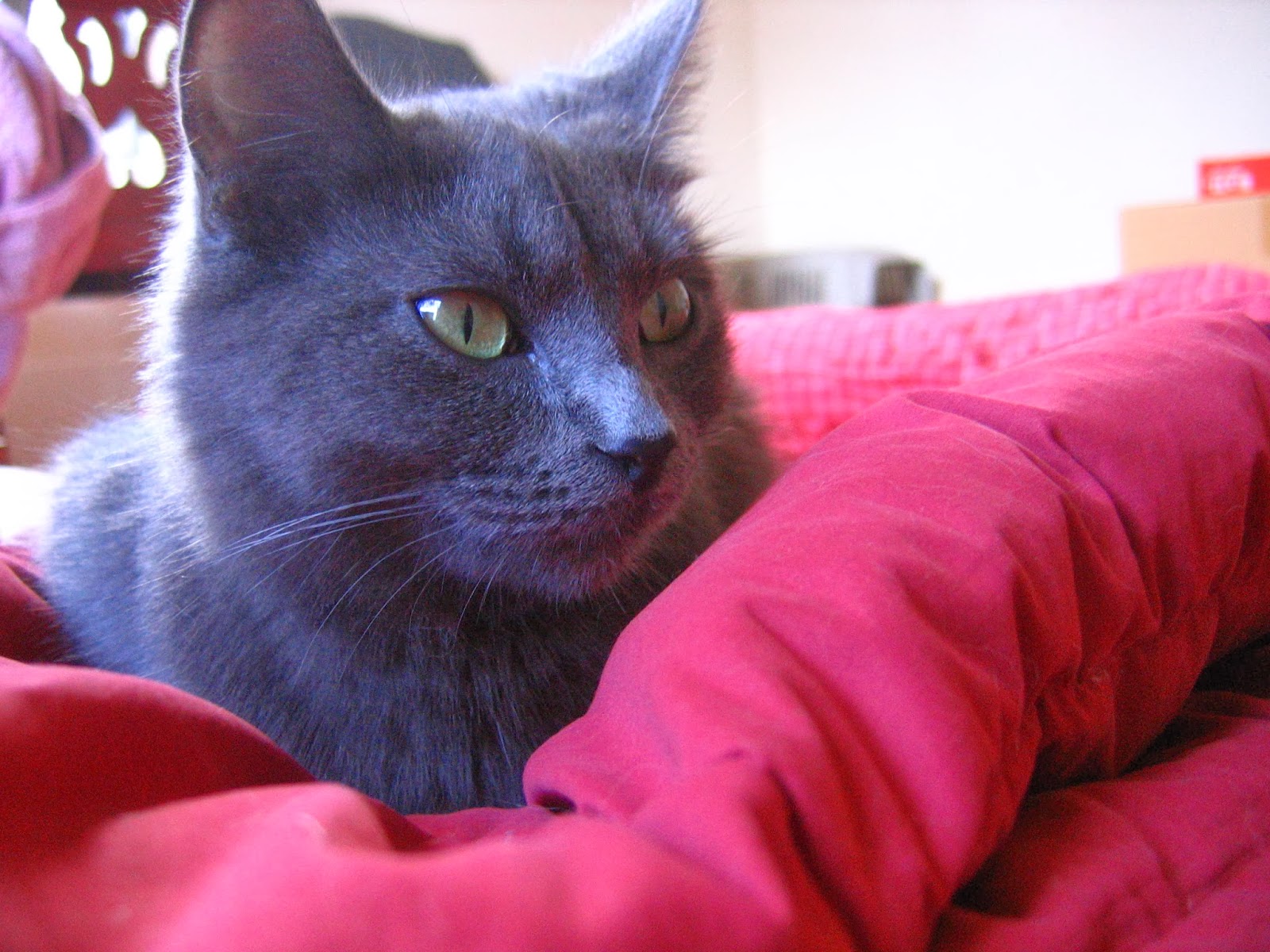 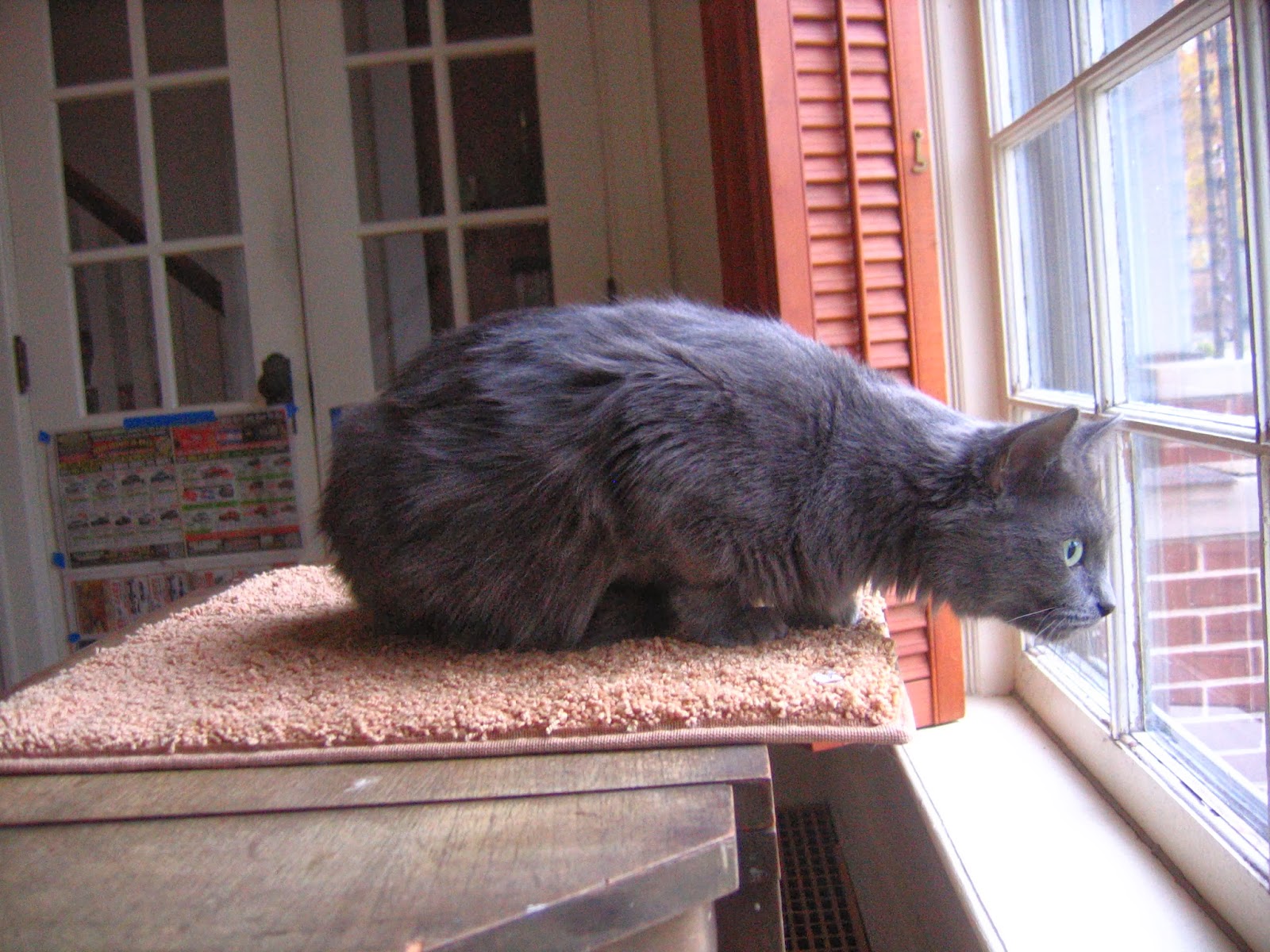 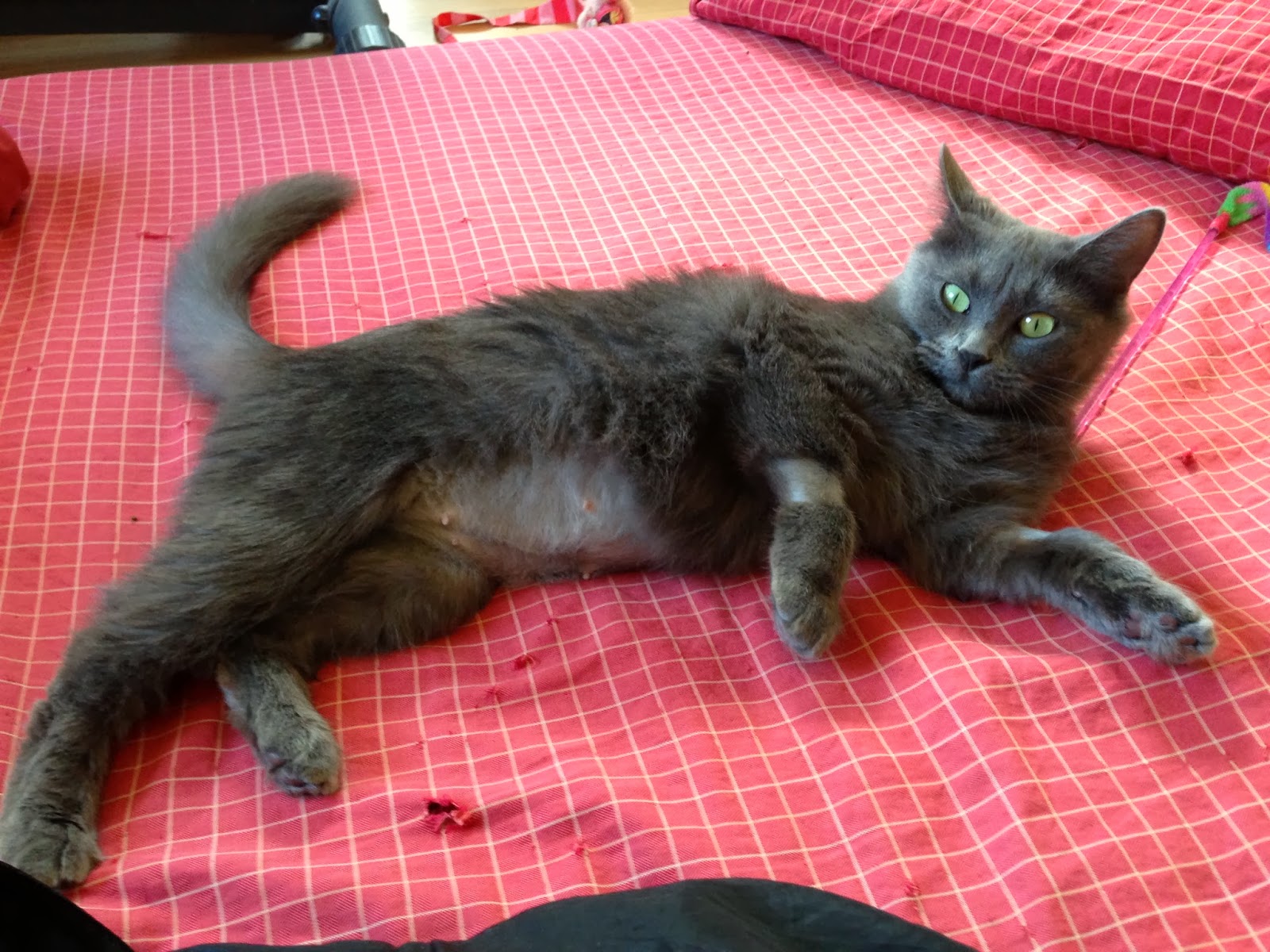 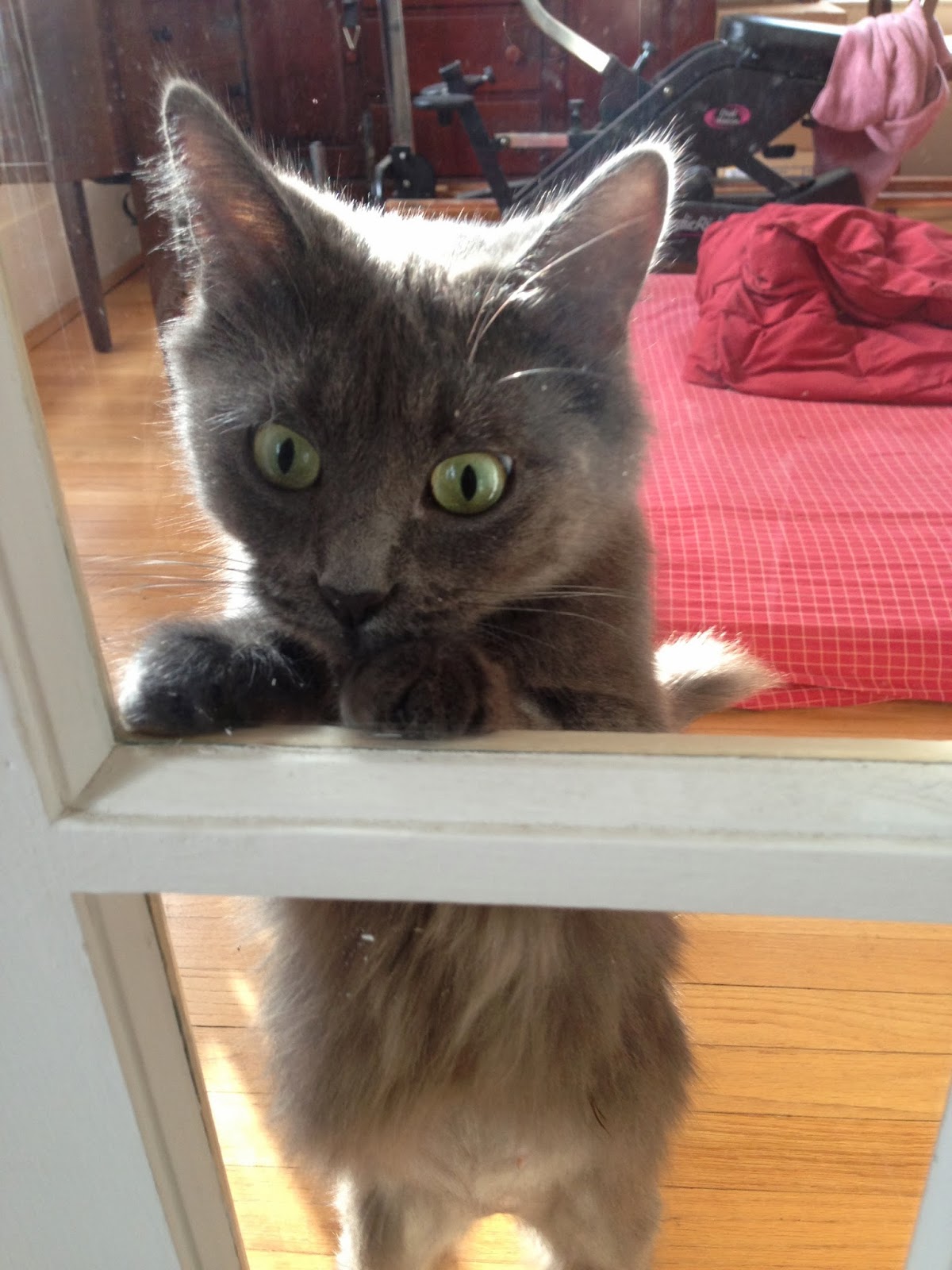 Happy Thanksgiving!
May you enjoy the holiday with friends and family, and that your day is filled with laughter as well as good eats!

And introducing...Shadow!  She is about one year old, and has a few patches where she was shaved for her spay operation.  She is playful, human-loving, and weighs about 4 lbs.  She is in a safe room right now, while resident cats Angel and Chuck get used to sharing their home that they've had to themselves for over nine years.  I know Shadow is okay with other cats, because I saw her snuggling with three, and playing with others, but our primary concern is to not blow the minds of Chuck and Angel.  We have even covered the glass doors into Shadow's safe room, because of this: 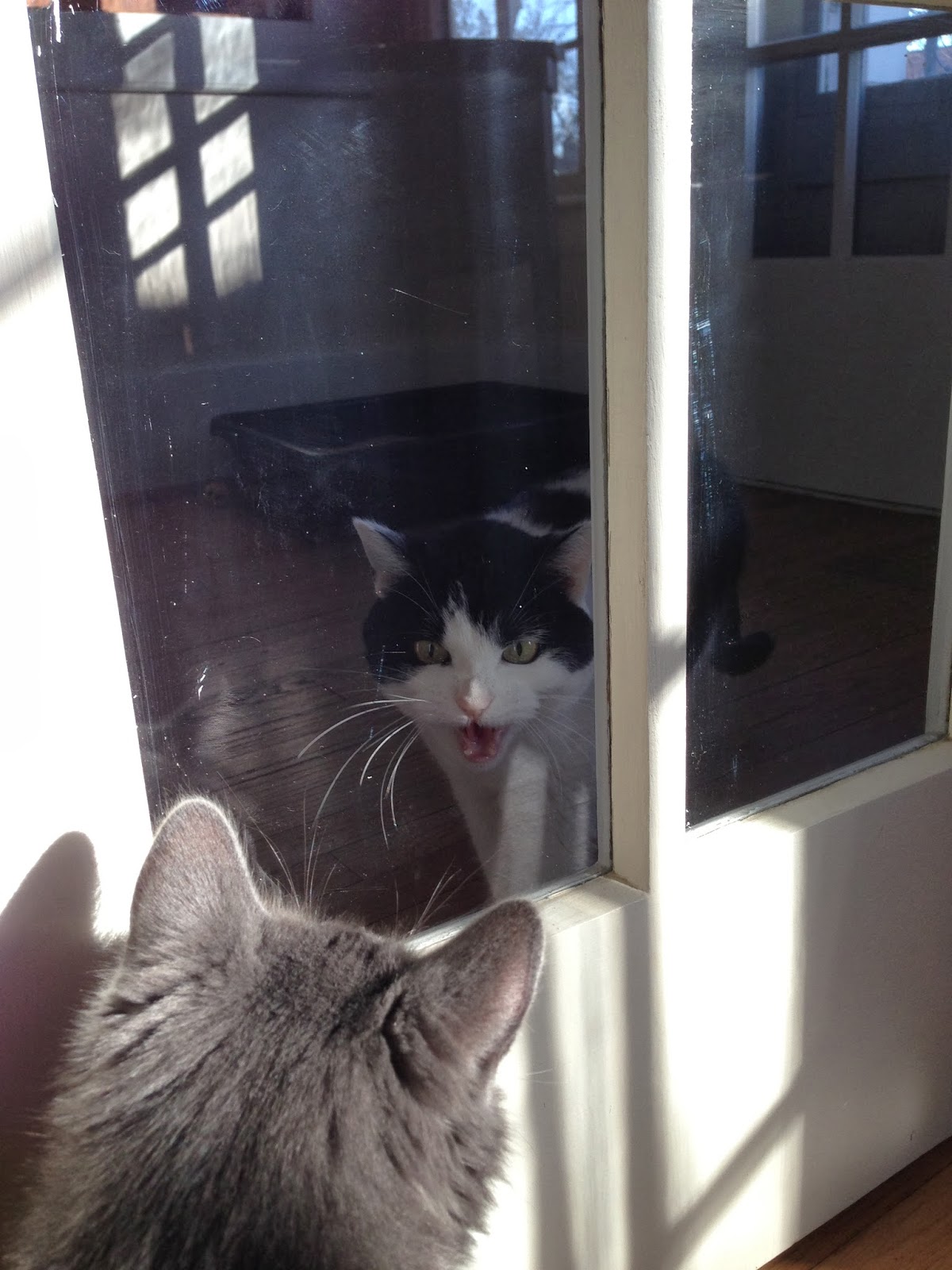 Chuck sits outside and whines...ahem, meows...because he wants to visit with the new cat.  Angel, on the other hand, appears fearful and we are lavishing love and play on all three to ease the situation.  (FYI, we are considering changing little Shadow's name, but I've tried dozens of names on her and she does not respond to any of them, not even Shadow!  We may have to pick one, and just go with it...any suggestions?)

So for now, I have THREE cat families to care for: Shadow in Room 1, Angel and Chuck inside, and the 'O' cats outside.  Mama Mia, Patty O. and Sammy all have thick coats, and appear to being doing fine while the temps drop.  I replace their water twice a day (or more), or simply break the ice off the top if it's thin.  We sprinkle a bit of sugar in their water, under the scientific theory that ice crystals won't form as quickly.  Wet food will freeze too, and they've toppled a bowl or two off the deck as they try to lick out the hard bits.  But they still come a'runnin' when they hear me in the yard, and the chorus of meows and dancing to get some petting warms my heart.

Sad note:  My heartfelt condolences to William, who's little bother Russell crossed over the Rainbow Bridge recently, so soon after Gracie.  Am thinking of you, William, your sis Caroline and your mom today.

Posted by Eastside Cats at 8:17 AM