Thanks, all for your recent kind words.  Cannot tell you how helpful they were to me.  I turned off my computer, my news feeds and Facebook for awhile.  Read a good book...two, actually, watched some favorite movies, and generally recharged.

Yesterday, the hubby and I went on a day-long date: attended an art fair in downtown Royal Oak, Michigan, went to eat at our favorite restaurant The Pita Cafe in nearby Oak Park (Majadra dinner and Starter Combo that we both share), and attended the afternoon baseball game in Detroit where the Detroit Tiger's team lost to the Cleveland Indians.  But the home team took two of three series games, so yippee!

What's really GREAT about Comerica Park, where the Detroit Tiger's play, is the tigers! 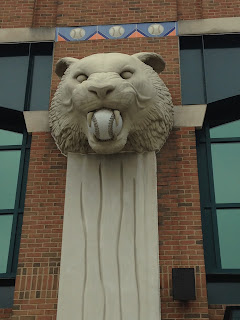 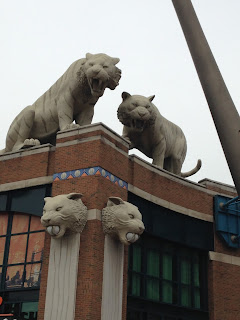 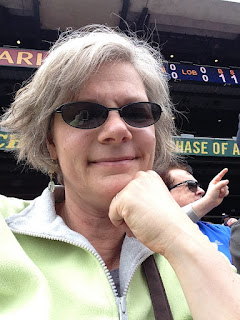 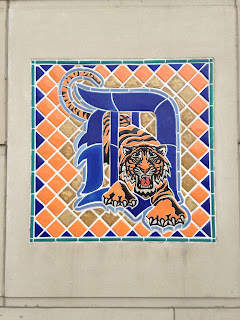 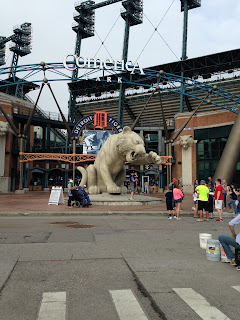 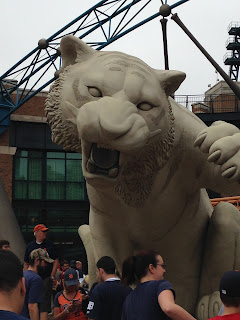 Funny thing: I found a penny while walking the art fair.  I picked it up and put it in my pocket.  While going through security before the baseball game, there were coins sitting on the table.  I scooped those up because I was sure the money belonged to the hubby...and they were just sitting there with no one else around.  Turns out, they weren't his.  In about the fourth inning of the game, I noticed some money laying under the seats of the guys in front of us.  The hubby fished the bills out, and we offered them to the two men, who refused because they checked their pockets and swore the money did not belong to them.  There was no one else around!  So, I FOUND a total of $11.28 yesterday.  How cool is that!  Proof that my recent frowns needed to be turned into smiles...the universe paid me back!

Then, today, I spent a couple hours with Paws For The Cause, playing with Sophie and Shelby, Reggie, Lulu and Marco...and five kittens; four orange, one tortoiseshell.  And right now, Chuck is howling at me to stop whatever it is I'm doing, and pay 100% of my attention on him.

And he's right!  What can possibly be more important than to adore a cat?

Posted by Eastside Cats at 9:53 PM