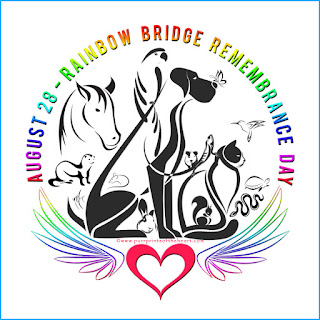 We've all lost furbabies, either our own or one that was like your best friend, even if it was a neighbor's cat or your grandparent's old dog.

The Chronicles of Zee and Zoey began RBRD in honor of their beloved kitty, who left this Earth three years ago.  Although a somewhat sad day, we also remember the joy, laughter, and love of our furangels.

This has been exceptionally hard for me, since our Chucky is beginning to fail.  I don't want to leave the house, for fear of losing even a few minutes of time with him.  We hope to have many more months with him, but it won't be years. Knowing what is on our horizon, makes RBRD difficult in reverse.

And yet, I must remember a few cats that really made a difference in my life:

Angel Sammy was a friendly feral, who I helped over The Rainbow Bridge when it was apparent that he was very sick.  Took me months to stop looking out the window for him.  Rest In Peace, Sammy.

William, from William of Mass Destruction, was very important to me. His stories made me think I could write online too!  I miss this kitty, and his brother Russell, who left us much too soon.


There are many other friend's kitties who've passed, that make me sad; too many to list here.  Each blogger has mentioned their own angel furbabies.

I'll add Angel Goose to my remembrance post; he was a wee kitten but was very sick.  His human parents moved away after he was helped to The Rainbow Bridge, but they still mourn his little soul.

And George, my very first feral/community cat, who I found at my previous office in 2008.  When I finally trapped him, and delivered him to his furrever home, I felt hollowed out and sad.  No more sharing tuna sandwiches with George on my lunch hour, or visiting with him while nearby deer roamed the woods.  George's family became fast friends of mine, so they let me know when he was helped to The Rainbow Bridge to end his suffering.  I learned so much from my 'George' experiences; he's really the one who set me on my path of recording my life with cats.  Rest In Peace, Angel George.

Sending hugs and purrs to all of you on Rainbow Bridge
Remembrance Day 2017.
Posted by Eastside Cats at 6:07 PM