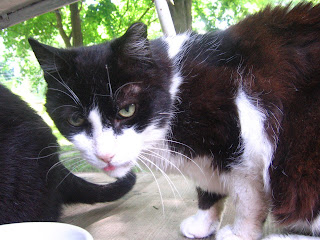 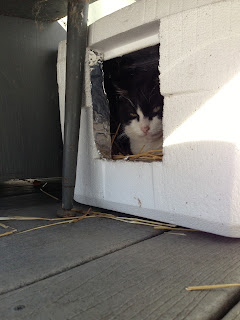 Hard to believe that two years have past since I said goodbye to Sammy. It's a gloriously beautiful day here in Michigan; temps are warm, with nice breezes.  Blue sky, and all the house windows are open to enjoy it all.  I wish Sammy were here; sleeping out in the yard, warming himself in the sunshine.

We used the drop trap to catch Sammy on April 28, 2010, to get him neutered and a rabies shot.  On October 30, 2010, I trapped him again, because he was not using his front leg due to a bite wound. Little did I know then, that one day I would be able to pet Sammy, and that we would be good friends.  When we noticed that his mouth didn't seem right, I tried trapping him AGAIN many times, but he would evade us each time.  Finally, I hit on the idea of replacing the feeding station with the drop trap, and I left it alone for weeks before I safely trapped old Sammy one last time.

Looking back, the veterinarian was maybe too quick to pull the 'euthanasia' trigger, but he was suffering with a mouth full of rotten teeth.  I could have maybe insisted upon dental work, no matter what the cost.  But we never got that far.  Once the vet ran the test that Sammy was FIV positive, she told me that the kindest thing was to let him go.  And I tell you, believe it or not, that Sammy too 'told' me that he was ready to leave his body.  I did not want to face it, but I nodded and let him slip away.  Sammy is the reason that I do not loan out my trap; it belongs only in my yard, with my cat friends.  I'll build new ones for folks, but I will keep Sammy's Trap close by. I remember how glad I was to have finally trapped him that day, and how later my heart twisted with sadness and regret.  Such a swing of emotions, and it was two years ago.  Wow.
Posted by Eastside Cats at 4:52 PM