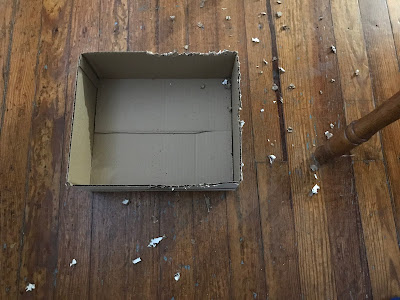 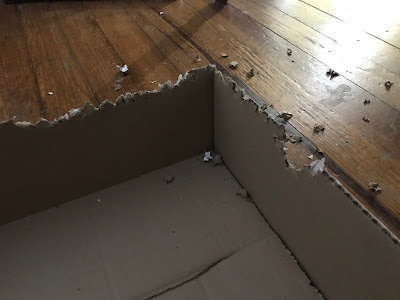 Some kitty decided that this box needed adaptation!  The pieces were carefully strewn about.  The fancy art critic says, "The uneven edge represents the vagueries of life, while the viciously ripped out fragments mimic the complexity of the cosmos."

Or, some kitty attempted to make enough noise to convince the humans to get up sooner rather than later, and feed some kitty!

Update on Patty O'Malley: Well, there really isn't an update.  I've been spritzing his wound with Vetericyn as often as I can.  We've had terrific rainfall for about 24 hours, though...cannot spritz much in a downpour.  Last night, I was convinced that we needed the veterinarian, and yet this morning, it wasn't too bad.  Any photo of this is too icky to post, so you'll just have to take my word for it.  Now that it's dry outside, I'll sit out on the deck, with the cat in my lap, and really get a good look-see.
Posted by Eastside Cats at 3:07 PM