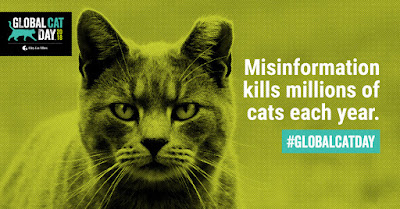 Global Cat Day®
https://globalcatday.org/
"Whether you’re dining in Istanbul, relaxing on a beach in the Caribbean, working on a farm in Kansas or walking the avenues of Washington, D.C. there are cats who need your help.

Millions of community cats, or feral cats who live outdoors, are killed each year in animal shelters after people take them there.
They don’t realize these cats live and thrive outdoors. Owned, adoptable cats are at risk, too. When they end up at animal shelters, they are often killed because the shelter lacks the space, resources, and programs to care for them. For this and so many reasons, Alley Cat Allies is here to protect cats.
Alley Cat Allies is the only global advocacy organization dedicated to protecting and saving all cats.
We ensure communities, shelters and veterinarians have what they need to launch programs including spay and neuter clinics and Trap-Neuter-Return. We work with advocates, public officials, and people like you to create a world where cats are valued and protected.
There are so many ways to love and help cats.
You can advocate to help make sure the cats in your community are protected with humane policies, adopt or foster a cat from your local shelter, carry out TNR, and more!"

All of the above was taken from Alley Cat Allies website

In 2008, the security team at my office told me that they'd witnessed a man and young son (!) releasing a cat into our parking lot.  I looked all over for the cat that day, but did not locate him.  The next day, however, I did find a tabby cat, who was hungry and very scared.  I fed the cat before work, on my lunch hour, and again before going home.  Through co-workers, I found folks who lived nearby who agreed to visit the cat on the weekends.  As time went on, I networked a group of like-minded animal-lovers who donated money, food, and time to help this cat, whom we named George.

I had NO IDEA at the time what TNR was, what the difference between a stray or a feral cat was, or that there were organizations like Alley Cat Allies or local rescue groups who participated in TNR projects.  It took us the entire summer to catch George, simply because I had forgotten to latch the first humane trap that I'd rented, and George got OUT...and therefore was onto all of our tricks to catch him!  I used about five different types of humane traps, but all for naught.  In the end, we set up a dog kennel and slowly lured George inside with food.  That day in the autumn of 2008 was bittersweet; George was a part of my life, and I didn't want to let him go.  Yet we'd found a family that agreed to take in George, since we really didn't know if he was once a pet, or was a stray.  George lived with his family until his passing years later, and I will always be grateful for them.  We are still in touch!

Because of George, I became involved in local animal rescue, and volunteered with several non-profit groups.  We soon discovered Hobo in our backyard, then Sweetie, and Angel Sammy and The PO'M came along afterward.  Attending a TNR class at All About Animals Low Cost Spay and Neuter Clinic and Rescue, I am now involved in spreading information about TNR, and encouraging all to SPAY AND NEUTER.