Blog the Change for Animals (#BtC4A) is a quarterly opportunity for bloggers to post about an animal-related cause that is near and dear to that blogger’s heart. 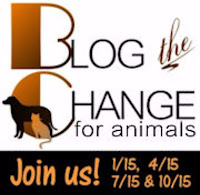 Onychectomy or phalangectomy is the excision of toe bone, meaning amputation of the ends of cat's paw bones, to completely remove the claw.  The result is a cat who walks on the stubs of the missing bone, often causing pain, litter box issues, and aggression such as biting.  At this point, 22 countries have outlawed this procedure, and the Canadian province of Nova Scotia has recently made it illegal, as well as Denver, Colorado.  West Hollywood, Los Angeles, San Francisco, Burbank, Santa Monica, Berkeley, Beverly Hills, and Culver City in California made it illegal several years ago.

So, why does one side fight so hard against declawing, while on the other side thousands of cats every day continue to undergo this mutilation?  The history of declawing is vague; I find information that dog fighters would have a cat declawed to use it as bait for training, or how declawing developed in the 1970's as more cats became 'inside-only'.  But just because it once was considered 'normal', has been proven to be harmful and even dangerous for the cat.

Ethical viewpoints on declawing in the US

Declawing is widely practiced but ethically controversial within the American veterinary community. Some American and Canadian veterinarians endorse the procedure, while some have criticized and refused to perform it. Two animal protection organizations in the US, the Humane Society of the United States and the American Society for the Prevention of Cruelty to Animals, discourage the procedure. The Humane Society of the United States has supported legislation banning or restricting declawing. Multiple surveys and polls taken from 2011 reveal that the majority of United States cat owners are against declawing, believing the practice to be cruel. These surveys also suggest that the U.S. public believes that the majority of veterinarians who perform declawings only do so because it is a lucrative practice.

Opposition to attempts to ban or restrict declawing has come from veterinary trade organizations, such as the California Veterinary Medical Association. On the other hand, the American Veterinary Medical Association states that declawing "should be considered only after attempts have been made to prevent the cat from using its claws destructively or when its clawing presents a zoonotic risk for its owner(s)."  Surveys suggest that 95% of declaw surgeries are done to protect furniture.

Bold not in the original text; I added it.

So, where do we go from here?

Other than convincing our politicians to move to change ordinances and laws, each one of us can make a difference, and I don't mean by just donating money.  YOU can talk to your family members, friends, ladies in your book club, the guy behind you in the check out line.

If you hear that someone has a cat, or considering getting a kitten, gently bring up the topic of declawing.  If they are against it, they'll let you know!  If they don't know, or believe it to be an okay procedure, tell them that science says the cat is irreparably harmed, and most likely will have aggression problems, pain problems, arthritis and a reduced sense of goodwill toward humans.  Go to the FAQs page at The Paw Project and have a 30 second speech on the benefits of a cat with claws.

We won't win everyone over, but for every win, there is a cat that lives it's life as a whole feline. 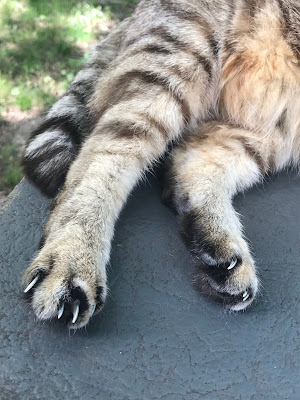 Email ThisBlogThis!Share to TwitterShare to FacebookShare to Pinterest
Labels: Blog The Change For Animals, City the Kitty, Help Us End Declawing, The Paw Project